In the past decade, the strategies and tactics of maritime criminals has shifted along with the tides of regional and global markets. Much of the activity in West Africa is classified as armed robbery at sea, rather than piracy, because most of it takes place inside waters governed by specific nations, whereas piracy by definition takes place in international waters.

Because the Gulf of Guinea borders many African countries with sizable oil and gas industries, with Nigeria being the dominant oil producer in the region, oil tankers are often the targets of attacks. Most criminals initially focused on targeting the cargo onboard these ships, including their oil, rather than the crew or the ships themselves. In what is known as oil bunkering, armed robbers would board a cargo ship and siphon oil onto another vessel to be sold on the black market.

Oil bunkering is a long, involved process that provides authorities with a considerable window of time to respond. When the price of stolen oil was high, the risk-to-reward ratio of bunkering was favourable. But a crash in global oil prices in 2014 forced criminals to reconsider the risk, and they pivoted to a different model in the Gulf of Guinea, long favoured by pirates off the coast of Somalia: kidnapping for ransom.

This guidance introduces recommended practices and procedures for vessels operating in the Voluntary Reporting Area as depicted on UKHO Chart Q6114 and SHOM Chart 8801CSD.

Kidnapping in Nigeria - The Ransom Business

Pirates mainly target ships with international crews. Since 2018 there have been a quarter fewer attacks on ships, but more hijackings. The modus operandi of Nigerian pirates changed: instead of three seamen, they would take the whole crew and hold them as hostages for money.

They kidnap the captain, first mate or chief engineer, along with other crew members, and take them off the ship, holding them for ransom onshore in order to extort a payment from either a shipping company or the hostages’ families.

Kidnappings in the Gulf of Guinea are resolved in a notably shorter length of time than those off the Somali coast, ranging from three to 10 days in 2018, compared to an average of 11 months during the peak of piracy near Somalia. But in the Gulf of Guinea, the kidnappings can be extremely violent. Former hostages reported abuse against them by their captors that included amputation of body parts and torture.

A Modern take on the Jolly Roger flag

This image was taken from the TORM ALEXANDRA during the attack. Pirate Action Groups will often carry identifying items coordinated by  uniformity of colour either as an item of clothing, flag or arm band. 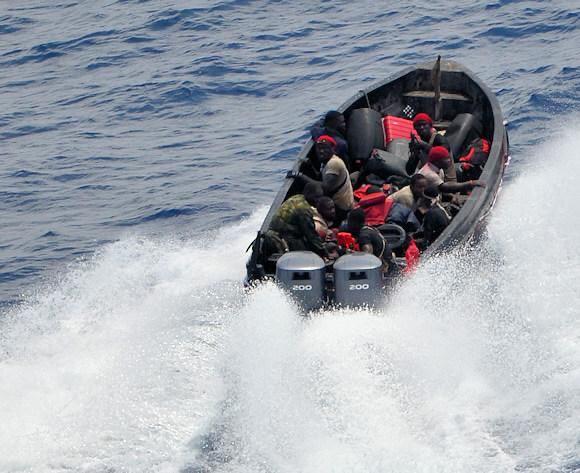 Nigeria: A history of maritime crime

For years, armed insurgent groups were the main threat in Nigeria’s oil-rich Niger Delta. In the 1980s and early 1990s, an influx of multinational oil companies, encouraged by the Nigerian government, sparked a popular backlash over grievances that the oil industry was also exploiting Nigeria’s economy and political system, and damaging the environment. These grievances intertwined into two notorious insurgencies that drove a decade of instability and targeted attacks on oil infrastructure: the Movement for the Emancipation of the Delta, or MEND, which was active from 2006 to 2009, and the smaller, but equally dangerous Niger Delta Avengers, or NDA, which took up arms between 2016 and 2017.

Both MEND and the NDA attacked undersea oil pipelines and offshore platforms, tankers and floating production vessels, aiming to cause enough damage to force the companies to withdraw from the Delta. These tactics proved to be highly effective. In June 2008, MEND attacked Shell’s Bonga Offshore Oil Rig, forcing the company to temporarily stop production at its $3.6 billion facility; in March 2016, the NDA used an underwater explosive to destroy Shell’s Trans Forcados Pipeline, causing $3 billion of damage. Kidnappings and oil bunkering also gave these insurgent groups new sources of funding, as well as political notoriety.

The economic consequences for Nigeria were drastic. MEND reduced Nigerian oil outputs by 25 percent, while the NDA reduced oil production by 40 percent in 2016, driving outputs to a 20-year low.

When MEND and the NDA left the scene, they were replaced by more opportunistic criminal groups motivated by profit instead of politics. Because these new groups aren’t aiming to disrupt a specific government, they have expanded their territories to attack ships in other parts of the Gulf of Guinea, and have inspired copycats in other countries. Piracy has now spread beyond Nigeria to areas off the coasts of Cameroon, Equatorial Guinea and the emerging hotspots of Togo and Benin.

Fears that terrorist organizations in these new frontiers will emulate pirates in the Niger Delta and assume their tactics, in particular, Boko Haram and its splinter group the Islamic State West Africa Province, or ISWAP, are not unfounded. Extremist groups elsewhere in the world have turned to piracy like Abu Sayyaf, a group in the Philippines linked to the Islamic State, which has attacked vessels in the Sulu and Celebes Seas and taken crew or passengers for ransom.

Somali pirates have, in turn, been accused of smuggling stolen weapons and cargo to al-Qaida’s affiliate in Somalia, al-Shabab, and the Islamic State’s faction there.

However, while the possibility cannot be completely ruled out, as of now there appear to be no organizational or tactical links between Boko Haram, ISWAP and the Niger Delta oil pirates. That is largely attributable to geographic location and operational capabilities. Both Boko Haram and ISWAP primarily operate in northeast Nigeria, far away from the Gulf of Guinea and other major West African waterways, and they have not invested in the complex and costly capabilities needed for piracy to actually be effective.

Terrorist groups can theoretically turn to piracy but this does not mean that they necessarily will, or that it would be in their strategic interests to do so. Instead, there will likely be more kidnappings at sea in West Africa by opportunistic but apolitical criminal groups, which will only serve to harm the shipping and oil industries, and hurt coastal populations most of all.