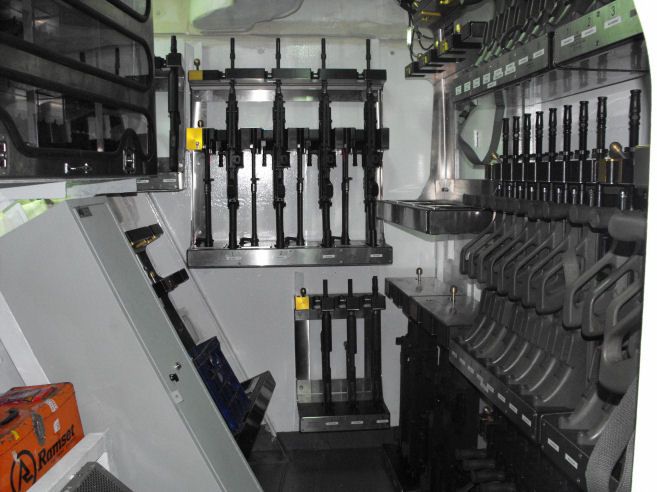 While the term “floating armoury” itself suggests that FAs are primarily armouries, and that their floating status is secondary to their armoury status, that is not the case from a law enforcement standpoint. When examining the legal regimes applicable to them, it is important to think about how a law enforcement officer would encounter a floating armoury. Since the simple answer is “on the water,” and in most cases on the high seas, maritime law is paramount, as FAs are, first and foremost, merchant ships under UNCLOS. The fact that they contain an armoury is secondary to their character as a vessel under international maritime law. Reviewing the legal regime around the armoury and, in turn, the weapons on an FA, therefore, is within the context of maritime law.

In recent decades, states have come together to address the danger posed by small arms and light weapons through a variety of instruments, both binding and non-binding. While the activities of FAs necessarily involve the movement of weapons internationally, the maritime jurisdictional aspects temper their application through, flag, port and coastal state laws, as well as the long-arm laws applied to certain nationals. There is, therefore, no international oversight mechanism for controlling the weapons that come on and off of FAs.

What follows is an overview of some of the main international instruments that apply to the arms and armoury onboard FAs.

Programme of Action to Prevent, Combat and Eradicate the Illicit Trade in Small Arms and Light Weapons in All its Aspects

The PoA in article 32 mentions cooperation to ensure the effective implementation of arms embargoes. The legal application of embargoes in the FA context, however, is complex. Given that the personnel involved are from a range of nationalities, the flag states involved vary, and given that an FA may traverse a coastal state’s territorial sea or call at a port, there are a number of ways in which an FA’s operation could encounter an arms embargo. Since most embargoes are ad hoc on a state-by-state basis, however, any analysis of them would be similarly state- specific and, as a practical matter, likely specific to the individuals involved more so than the FA’s operations overall. Some Security Council derived embargoes, however, may be more generally applicable.

The Arms Trade Treaty (ATT)3 the newest international instrument concerning global arms control, entered into force in December 2014, partly as a hard law complement to the PoA. As of early 2019, it has 99 state parties. The express objectives of the ATT are to: “Establish the highest possible common international standards for regulating or improving the regulation of the international trade in conventional arms; [and] Prevent and eradicate the illicit trade in conventional arms and prevent their diversion.” That said, the application of the ATT in the maritime domain remains in dispute. While the provisions relating to transfer, brokering and trans-shipment could all be interpreted to be applied to the maritime space, coastal state jurisdiction and flag jurisdiction are not the same. No consensus view yet exists as to whether the ATT applies in the maritime context, though state practice seems to suggest a preference in favour of its application.

One additional caveat must be raised: the ATT “shall not apply to the international movement of conventional arms by, or on behalf of, a State Party for its use provided that the conventional arms remain under that State Party’s ownership.” As noted, it is possible that a state or a state proxy may wish to use a FA (for either legitimate or nefarious purposes). In such instances, the ATT would not apply to those particular weapons, so long as the state retained ownership of them.  Articles 3, 4 and 5 all require states to establish national control systems over ammunition,  parts, and conventional arms generally. According to article 5, “Each State Party shall establish  and maintain a national control system, including a national control list, in order to implement the provisions of this Treaty.” The control list must be provided to the ATT Secretariat pursuant to Art. 5(4). In applying the ATT to flagged vessels, FAs must be worked into the control system of the flag states. If they have not done that, then the flag state would actually be in violation of the ATT.

Floating Armouries and the Law- Services