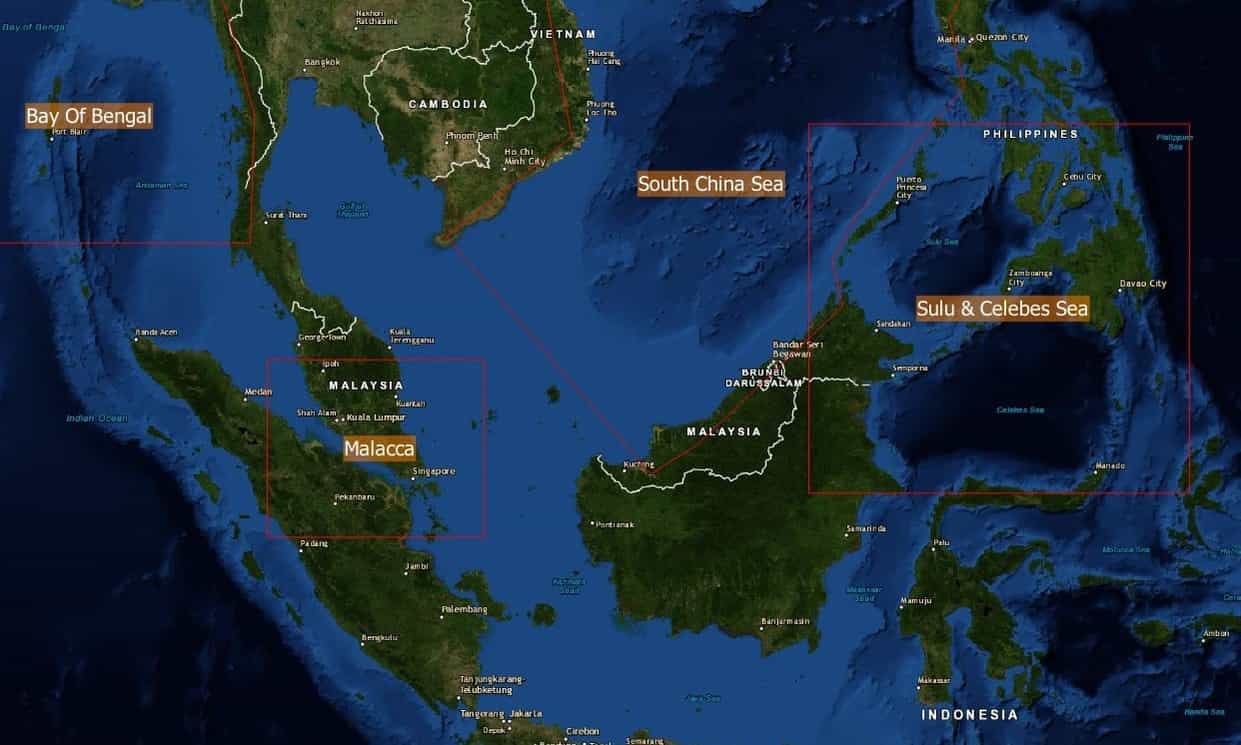 Why are the Straits of Malacca so Important?

The Straits of Malacca is a narrow stretch of water in South East Asia that is 550 miles long and is located between the east coast of the Indonesian island of Sumatra and the west coast of the Malay Peninsula. It is linked to the Strait of Singapore at its southeast end. The funnel-shaped channel of the Malacca Strait is 800 km long and connects the Indian Ocean to the South China Sea. At its narrowest, Phillips Point, the strait is less than 3km wide.

The straits are the main and quickest shipping channel between the Indian Ocean and Pacific Ocean, making it one of the most important arterial shipping lanes in the world. Over 400 shipping lines, linking over 700 ports worldwide, regularly utilise the straits for transit and/or transhipment. Over 70,000 ships pass through the straits annually. Vessels traverse the strait using the Traffic Separation Scheme (TSS), which established was established in 1981 to create opposing streams of vessels and reduce the risk of collisions.

In contrast to centuries of piratical activity in the region, it was 9/11 that heightened concerns about the vulnerability of the Malacca Strait to terrorist attack and prompted a reassessment of the vulnerability of the maritime sector. The threat perception about the region was heightened by fears that the ease with which pirates seemed to carrying out attacks in the strait at the time could be translated into a terrorist group doing the same. These fears led to The Joint War Committee (JWC) of Lloyd's Market Association declaring the Straits of Malacca a high-risk area in 2005, although this decision was later rescinded.

The Straits of Malacca are crucial to the flow of global trade and strategically and commercially significant for several reasons. It is the shortest sea route between the Indian Ocean and Pacific Ocean and over one-third shorter than the closest alternative sea-based route. Alternate routes to vessels, if, for example, the straits were blocked, as happened near to Port Dickson in August 2009 and the Changi terminal in May 2010, vessels would be forced to reroute around the Indonesian archipelago through the Sunda Strait or the Lombok Strait.

The Strait of Malacca has strategic importance, too. Roughly a quarter of all oil transported by sea (more than 15 million barrels per day) passes through the straits and several countries in North East Asia, including China and Japan, rely heavily on the oil imports that pass through the straits. Any blockade of the strait would result not only in China being cut off from a significant proportion of its energy supplies in the Middle East, but also from raw material from Africa, where China has invested billions of dollars in mining and infrastructure projects.

Piracy has been a long-standing issue in the Straits of Malacca; accounts of piracy in the region can be traced back to the 14th Century. However, it was not until the late 1990s that the issue came to the attention of the international community. This was for 2 reasons. Firstly, the 1997 Asian Financial Crisis ravaged the region and forced many people living in coastal areas in Indonesia and Malaysia to turn to piracy. Secondly, several high-profile pirate attacks took place in the region, among them the hijacking of the Petro Ranger in 1998 when en route from Singapore to Ho Chi Minh, which likely led to increased reporting by shippers in the region. In the early 2000s, piracy in the Straits of Malacca accounted for around 40% of piracy worldwide.

The threat to shipping in the region has been reduced by individual responses from the littoral states in the region, such as vigilant patrols and constant operations by Royal Malaysian Marine Police, and regionally coordinated efforts including Operation MALSINDO. MALSINDO was launched in July 2004 and involved the navies of Malaysia, Indonesia, and Singapore patrolling in a coordinated fashion in their respective territorial waters. Another initiative was the introduction in September 2005 of joint air patrols over the strait by the littoral states The three states each donate two planes for the patrols, known as the “Eyes in the Sky” (EiS) plan. The launch of Regional Cooperation Agreement on Combating Piracy and Armed Robbery against Ships in Asia (ReCAAP) in 2006 has been the most significant antipiracy initiative in Asia and has greatly improved the maritime security architecture among countries. ReCAAP fosters multilateral cooperation to combat the threat of piracy and armed robbery against ships though information sharing, capacity building, and cooperative arrangements.

The most current data on maritime security incidents in the Straits of Malacca and adjoining Singapore Strait show that incident numbers peaked in 2011 and 2015, with 26 and 104 recorded respectively. The lowest number of incidents occurred in 2016, when only 2 were recorded. The trend of most concern in South-East Asia in 2020 is the increase of incidents in the Singapore Strait when compared to the same period in 2019 – with incidents tracking at over 50% higher than last year.

Currently incidents in Straits of Malacca and Singapore (SOMS) accounted for the overwhelming majority of incidents to ships underway in Asia however, considering the very high number of vessels which transit the strait on an annual basis, the proportion of ships being attacked in the waterway is extremely small; comparing the number of attacks recorded, to the number of vessels that transit annually, gives a less than 0.5 percent probability of a ship being attacked. Tugs are the most commonly targeted vessel type in the Straits of Malacca – because they often do not have Automatic Identification System (AIS) equipment installed and are easier to attack, given their low freeboards.