The Red Sea, with its connection to the Suez Canal, is one of the world’s busiest shipping lanes, offering an alternative to the route around the Cape of Good Hope. It’s an essential channel, crucial to maintaining many countries’ political and economic stability.

The Red Sea is of huge strategic importance lying between the continents of Asia and Africa, separating the Middle East and the Far East as well as Europe and Asia.

The geopolitical position of the Red Sea is important because it’s a natural border between the eastern coast of Africa and the western coast of the Arabian Peninsula and a vital route for the unarmed transportation of oil through the Bab el-Mandeb in the south to the Suez Canal in the North. As long as oil remains a primary source of energy for the world, this shipping lane will remain a vital channel for its transport from the Gulf.

Militarily, it’s a vital navigation route between nations and their global bases and as such, has become a theatre for where regional conflict and competition play out.

The Red Sea has increasing economic importance as a result of the large oil reserves throughout the region and precious metal resources. With the exception of Saudi Arabia, which commissioned extensive exploration programmes opposite its coast, none of the other coastal states, until recently, had explored the potential of mineral deposits. Subsequently, vast amounts of zinc, copper, silver, gold and elements such as cadmium, cobalt and hydrocarbons have been discovered in the isolated depths of the Red Sea.

Regional security in the Red Sea - Why is the Suez Canal so important to international shipping?

Free navigation through the Red Sea is crucial to Israel’s trade and communication with Asia and Africa. Israel’s founders insisted on including the southern Negev Desert and its outlet the Gulf of Aqaba within the projected Jewish state. Key to Israel’s policy was access to the Red Sea as an alternative to the Canal which could be closed to them by hostile Arab nations.

In March 1949 Israel occupied the Jordanian village of Um Rashrah on the coast of the Gulf of Aqaba. It violated terms of the Israel and Arab states armistice but was a necessary measure to secure a foothold on the Red Sea coast. Um Rashrash is now a nature reserve, naval and air base on the Red Sea, Eilat. In the early 1950’s Israel attempted to claim the right of passing through the Suez Canal but these were rejected by Egypt. Egypt then went one step further and began rejecting Israeli shipping, all Israeli-produced goods and merchandise destined for Israel even if shipped by non-Israeli ships.

● Israeli-Egyptian war of 1967 caused the closure of both the Tiran and the Suez Canal.
● Palestinian fighters attack the Coral Sea Israeli tanker from the island of Perim.
● Egyptian forces cross Suez Canal to the east bank and destroyed the Bar-lev line in the process of liberating occupied Egyptian land. The Egyptian navy then took control of the southern entrance to the Red Sea at Bab el-Mandeb.

The United States interests in the Red Sea

As a route for spices prior to becoming an artery for crude oil, the Red Sea has held strategic importance for the West for centuries.
The decline of Europe’s colonial hold in the region created an opportunity vacuum for other international players to increase their influence. From 1968 the United States postured to occupy the space left by Britain after it withdrew from the Gulf region and Aden. As a waterway providing access to key Middle Eastern states and a shoreline littered with jockeying nations the southern approaches quickly became of strategic importance to the United States.

The United States depends on Arabian Gulf oil transported through the Red Sea to power its factories, homes and maintain their economy. The main regional goal of the US military in the region is to ensure the uninterrupted transportation of oil to western nations and to provide security to US petroleum companies operating in the region. In this respect, it’s a global control and command centre for the flow of crude oil to Europe and beyond.

The importance of the Red Sea is reflected in the location of US equipment and military bases across the Indian Ocean, Arabian Gulf and Red Sea placed specifically to safeguard US interests in the region and support free navigation in the Red Sea during times of peace and war.

The United States presence in the region is also a countermeasure to Russia’s interests in the region. Since the late 1960’s the US has tried to build political and military alliances with regional players and offered economic and financial incentives fearing the influence of Russia in the region. In the 1970’s, the US provided military facilities to both Kenya and Somalia to counter the Soviet strategy in the region without having to commit to confrontation.

Many of the states where US forces are located are conscious that the presence of the US is their best guarantee against hostile actions from other regional players. This is no truer than in its relationship with Israel, as the ultimate guarantor of Israel’s security. Free navigation of the Red Sea through the Bab el-Mandeb strait is essential to Israel as a route to getting its goods to market in Africa and Asia.

Russia and the Red Sea

When British colonialism waned in Africa and Asia, Russia saw it as their opportunity to exert and solidify influence in the region. It’s a crucial region for them as their southern sea route and shortest waterline of communication between its European ports in the Black Sea and the Indian Ocean. The Suez is a fast and efficient route for Russia to support its military assets in the region. During the Cold War, the Russians also realised that northern parts of the Indian Ocean could be used by the US to potentially deploy submarines and weapon systems targeting Russia, this compelled them to strengthen their influence in the region by building partnerships but also by supporting radical regimes and revolutionary movements, the antithesis to the US’s strategy. For example supporting the Haile Mariam regime in Ethiopia which ultimately led to its military success over Somalia and Eritrea in 1978.

In terms of economics, the Red Sea access is essential to Russia as it’s only year-round maritime link between Europe and Far Eastern Russia. It’s a vital trade, shipping and fishing access route, unlike the US they are less dependent on the route to meet their nation’s oil needs.

Arab States and the Red Sea

The Red Sea is the epicentre of the Arab world both nationally and geographically.

The Arab states use the Red Sea as a tool to exert influence and put pressure on other regional players. It’s a major trade route for its coastal states especially Sudan, Ethiopia, Jordan and Israel, it is also the main and only sea outlet for Jordan, Djibouti and Sudan. With the Red Sea as the main export route for Arabian petroleum, it’s also hugely important to their economies with 93-100% of total exports of some Arab countries.

Uninhabited Islands of the Red Sea

Tiran and Yotvat island are islands within the borders of Saudi Arabia previously administered by Egypt but alongside Sanafir officially ceded to Saudi Arabia in 2017. The islands are located at the entrance of the Straits of Tiran, which connects the Red Sea to the Gulf of Aqaba. The Straits of Tiran is Israel's only access from the Gulf of Aqaba to the Red Sea. Tiran Island is of strategic significance in the area, as it forms the narrowest section of the Straits of Tiran, which is an important sea passage to the major ports of Aqaba in Jordan and Eilat in Israel. The island is inhabited only by military personnel from Egypt and the Multinational Force and Observers (MFO).

Nov 25 - An explosion damaged a Greek-managed tanker at a Saudi Arabian terminal on the Red Sea just north of the Yemeni border, the ship’s manager said, in an attack confirmed by Saudi Arabia.

Nov 14 - The Saudi-led coalition fighting in Yemen said it had intercepted an explosive-laden drone launched by the Iran-aligned Houthis towards the kingdom.

Nov 13 - The Saudi ministry of energy said it dealt with a limited fire that broke out near a floating platform belonging to the Jazan oil products terminal.

Nov 11 - The Saudi-led coalition said it had intercepted and destroyed two explosive-laden boats in the southern Red Sea launched by Yemen’s Iran-aligned Houthi movement from the Yemeni governorate of Houdaidah.

March 4 - The Saudi-led coalition said it had foiled an attack on an oil tanker off Yemen’s coast on the Arabian Sea. 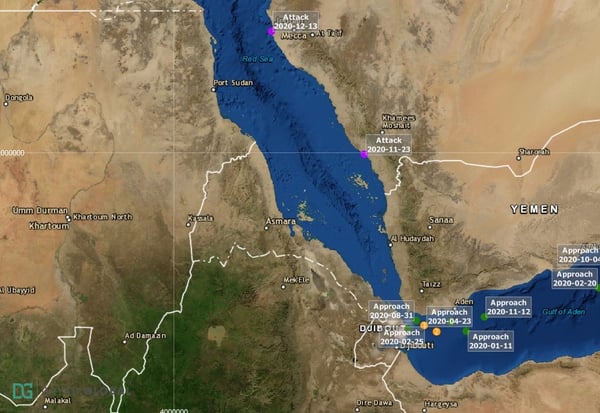 What is the actual risk to shipping security in the Gulf of Aden?

Whether the explanation of current events in the Gulf of Aden is attributable to human trafficking, the influence of maritime terrorism, the over-reporting of approaches cautiously labelled as suspicious or against all indications, a resurgence in Gulf of Aden piracy, it is prudent that a full and thorough analysis of events is conducted. Establishing a narrative which explains the maritime security events in the Gulf of Aden so far in 2020 is complicated but may yield a bold and potentially uncomfortable conclusion.

With approximately 33,000 transits annually through the Gulf of Aden and the vast majority of the very low incident reporting amounting to little more than reports of what could be irregular maritime traffic, it is clear that the assertion that piracy, in its traditional form at least, no longer presents the most significant risk to shipping in the Indian Ocean remains. Further still, current data, when compared with 2019 and provided with context, suggests that despite the increased volume of reporting, there has not been a corresponding increase in risk profile to the region.

It is essential that companies have access to independent and impartial risk analysis which supports them to understand and mitigate risk in a cost effective and sustainable manner, whilst ensuring crew safety. With an ever increasing volume of companies looking to reduce their dependency on the AST model, both as a result of the reduction in risk and the pressures of a post COVID-19 trading environment, it is increasingly essential that companies have access to independent analysis that cuts through simplistic media-reinforced narratives that drive an over-reliance on commercially punitive mitigations. With the risk to vessels more dynamic and less clear than any other time in history, the issue of crew safety has never been more important. 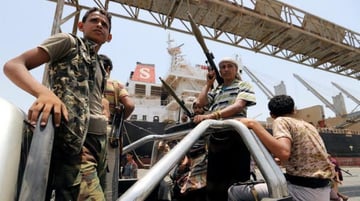 The Iran-backed Houthi rebels in Yemen announced Saturday that attempts to reach an understanding during a six-month ceasefire with Saudi Arabia that expires Sunday had reached a "dead end."   The tru... 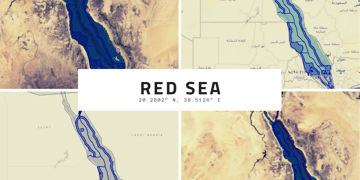 The US and the Netherlands support UN efforts to address and avert the economic, environmental, and humanitarian threats posed by Yemen’s Safer oil tanker in the Red Sea region. Dutch Ambassador to th... 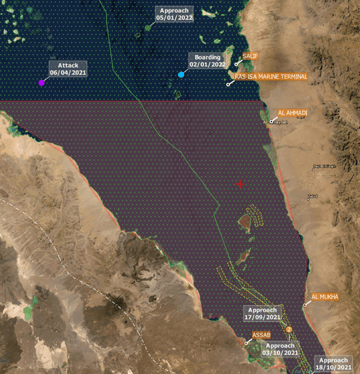 Reporting by UKMTO and MICA Centre indicates that a vessel was attacked whilst in transit 33nm SSW Al Hudaydah. It is understood that the vessel was approached by unknown individuals in 3 skiffs and s... 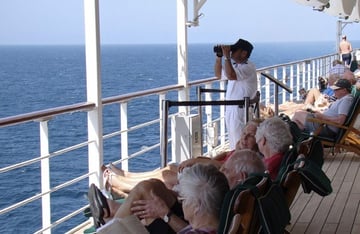 The increasing complexity of maritime security in the Red Sea

The US last month established a new Combined Task Force 153 within the Combined Maritime Forces in the Middle East to focus on the Red Sea. The new task force reflects growing international interest i...